Over the past 16 years, it has become obvious that ‘Camp’ Camp is much more than a super-fun, unique GLBT vacation. Camp has evolved into a wonderfully fun, ongoing, supportive community of gay, lesbian, bisexual and transgender folks from all over the U.S. We are proud of – and extremely grateful for – this aspect of ‘Camp’ Camp. The supportive environment fostered at Camp makes it easy for people to step out of their comfort zone each day, accomplishing things they never thought possible. We have felt for some time that it’s important for Camp to try to share that kind of positive energy and give back to the GBLT community however we can. Well, now we will…

We began our efforts to return some of that great Camp energy and support to the GLBT community-at-large last year, our 15th Anniversary season. Instead of presenting last year’s two 15th-Year Campers with yet another anniversary gift emblazoned with the Camp logo (5th-Year Campers receive Camp blankets and 10th-Year Campers receive Camp wheeled duffle bags), we donated $100 in each of their names to the It Gets Better Project. And we will be doing the same again this year: $200 will again be donated to the It Gets Better Project, $100 each for Michele G. of Providence, RI and Lisa D. of Reading, MA, this year’s 15th-Year Campers. 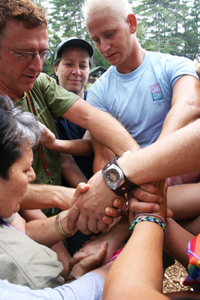 Additionally, beginning this year, we are stepping up our giving back even further with our new “Camp Gives Back” campaign. Each year going forward, we will be choosing one charitable or political organization benefitting the GLBT community and donating 10% of our Camp Store sales to that organization. We will also make it easy for our Campers & Staff to donate additional funds to the chosen organization through our Camp Store, as well. Yes, we operate on the proverbial shoestring budget and our Camp Store certainly doesn’t have sales in the tens of thousands of dollars, so we know any donation that we make will be modest, at best. But, this is one small way that we can further support the GLBT community-at-large that all of our wonderful Campers & Staff are part of.

We are pleased to announce that we have chosen Mainers United for Marriage to receive our campaign’s inaugural year donation. ‘Camp’ Camp has been held in Maine since our very first year in 1997 – and we love Maine! It’s a beautiful state with friendly, welcoming people who have always made us feel at home. In 2009, Maine was the first state to pass a same-sex marriage law through the legislature and have it signed by the governor, only to have opponents of the law overturn it by a mere 30,000 votes.

Well, earlier this year, Mainers United for Marriage gathered over 105,000 signatures to bring a pro-marriage Citizens Initiative to the ballot this November. Additionally, the most recent polls of likely 2012 voters in Maine show a 54% support for marriage equality, making Maine the first state ever to begin a marriage equality campaign with a majority of support. In short, Maine could make history this November and turn the tide for marriage equality across the country! So, we would like to do whatever we can to help them in their efforts.

Those of you who will be attending Camp next month can help Mainers United for Marriage in their efforts by just buying an extra Camp t-shirt or souvenir or two (or three) in the Camp Store. If you aren’t able to attend Camp this summer, we suggest just popping over to the Mainers United for Marriage website and making a small donation. We can all be part of history, helping to ensure that gay & lesbian relationships in Maine – and possibly even all across the country – finally get all the rights, benefits and recognition they deserve.

Come play with us!

…Everyone made me feel very welcome, from Staff to Campers.

You have built a wonderful community. …I came away very impressed.

With all the talk about “community,” I’ve never experienced a feeling of gay community anywhere but at ‘Camp’ Camp. That alone is enough of a draw for me.

I love the Camp experience and always feel rejuvenated after attending.

I’ve traveled a lot, and I’ve never found another place as warm and welcoming as ‘Camp’ Camp; not even close!

All the evening activities were outstanding. So much fun!

I’m not a terribly social person and large groups can make me uncomfortable. That being said, I never felt safer in a group of people so quickly before.

I laughed more in one week than I did all year.

I love this place!

I was most surprised at how welcoming, caring, and lovely each and every Camper and Staff member was. …Thank you for continuing to offer this wonderful environment after all these years.

Thanks for continuing to make ‘Camp’ Camp a place for us to relax, unwind and be ourselves!!

I keep returning for the community and sense of peace, love, and all around decency.

It is the most positive experience I participate in and makes my year!

Everyone was so friendly when we first arrived. I was hooked!  …’Camp’ Camp feels like home.

It is the most fun I have all year. And I love the people.

The openness of everyone’s attitudes and acceptance was intoxicating.

This place changed my life. I am a better person because of Camp.

It’s like I’ve been recharged. …It is the one place where I can be my truest self. You can’t put a price on that.

I just love Camp. It gives me the opportunity to totally & literally unplug. No cell phone, no computer… total vacation time for me.

It’s a week I wait for every year.

I learned so much and created some beautiful things in my jewelry and pottery classes. We are very fortunate to have such amazing teachers in all of the activities at Camp.

Camp really is the “Best Time Ever!” Sounds corny, but it’s true.

I’ve been to festivals and conventions, and even camp as a kid, and been overwhelmed by the number of people, and felt lost in the shuffle. That didn’t happen here! Returning Campers and Staff, as well as other first-years, were very friendly. I never felt alone or isolated.

The food was fantastic throughout the week, and there’s always lots of fun things to do all day long.

My friends never stop talking about it, and now I know why!

I’ve always felt welcome and included at Camp, perhaps more there than in many other places at home.

I’ve never had as much fun anywhere as I do at Camp.

I met some really amazing and very special people that I otherwise would have never crossed paths with. My heart doubled in size in just one week.

…one of the most supportive and LGBT-friendly environments I have ever experienced.

I love the grounds; they are so beautiful and serene. It made it easy to do nothing and just enjoy the nature sounds.

Cheers to all who put in such effort to make a safe, wonderful, and fun environment. Flawlessly executed direction and organization. …Extremely well done.

All the important things, the take-aways, I got from summer camp as a child remain still as an adult. I get a chance to make new friends, try new things, and rekindle my spirit.

Totally fabulous. …The spirit of Camp is so joyful and fun and silly and accepting all at once.

The food was outstandingly amazing! …I loved that there were so many vegan options.

The diversity within our community is astounding, and I feel that everyone was welcome…and especially appreciate that the whole age spectrum of our community was included, from the energetic (sometimes scared) kids to our esteemed elders.

There is no place on earth like ‘Camp’ Camp, and I feel renewed and light-hearted there in ways I don’t feel at home or in any other community.

Thank you all for the gift of a wonderful week. I appreciate your patience, care, generosity, understanding, attention to detail, hard work, creativity, openness, effort, and LOVE!

Check out the people, activities, sights, and sounds of life at Camp.
more >

If pictures speak a thousand words, here are a million reasons to come to Camp!
more >

Make a virtual visit to our lovely site in gorgeous southwestern Maine.
more >

An all-inclusive week of great fun and new friends.

Get to know our friendly, inclusive gay community – and then join us for the best time ever!

Why do 75% of the people who come to Camp return for another year or more?

Take a look at our colorful, photo-filled brochure 7 Ways ‘Camp’ Camp Will Improve Your Life and discover why your life will never be the same after Camp!

It's not too late folks, if you want to come to 'Camp' Camp! It really is the #BestTimeEver! Don't take it from just me, here are some amazing testimonials! Also, in the comments is the link to the open staff positions. If you think it's too pricey, your can offset the cost! I do! About half of us do! Even the "work" is fun!
#MoreThanAVacation
#VacationWithMe ... See MoreSee Less

SPACE IS STILL AVAILABLE for our 2022 Season this August 21-29! REGISTER TODAY at campcamp.com/register and discover for yourself why 75% of our Campers make 'Camp' Camp their annual vacation destination.

Guess who was featured on NYC's PIX11 morning show today? Check it out as Camp's Director Kerry Riffle and one of our Rainbow Group Leaders, Michelle Rediker, discuss what makes an LGBTQ vacation at 'Camp' Camp the best time ever! ... See MoreSee Less

I'm finally taking the plunge after debating since the 90's about going. I'm 58 next year and I decided to go before I get too old to go. So looking forward to it.

This new piece from Conde Nast Traveler on summer camps for LGBTQ+ adults features one certain summer camp for LGBTQ adults quite prominently. ... Check it out!
🌲🖤🤎❤️🧡💛💚💙💜🌲 ... See MoreSee Less

The Great Queer Outdoors: How These Sleepaway Camps, Wilderness Groups, and Campgrounds Are Creating Space for LGBTQ+ Travelers

Thanks for participating in the article!

I don't see any reference to couples attending. Do you get couples? And obviously the accommodations are what they are. Just wondering about how q couple might be received and how the staff thinks they might feel.